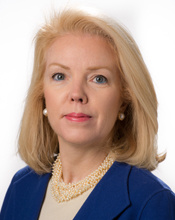 Rose Gill Hearn served as Commissioner of the New York City Department of Investigation (DOI) from 2002 through 2013 and was the longest-serving Commissioner in its 140-year history.

Rose’s leadership led to significant increases in DOI’s productivity, including assets recovered for NYC, and a comprehensive corruption-prevention program. In 2013, Rose also helped create the Center for the Advancement of Public Integrity at Columbia Law School, which focuses on accountability in government and municipal jurisdictions throughout the world, and chairs its Advisory Board. Prior to her appointment at DOI, Rose was a federal prosecutor for ten years in the U.S. Attorney’s Office for the Southern District of New York, where she served as Deputy Chief of the Criminal Division and Chief of the Crime Control Strategies Unit. She has taught as an Adjunct Professor of Law at Fordham University School of Law and worked as a litigator in the private sector. Rose is the former Chair of the New York City Campaign Finance Board (2014-2017), a national model for nonpartisan regulation of public financing of campaigns and for voters’ assistance.

Rose has authored a number of articles and has hosted and presented at conferences on anti-corruption policies in the U.S. and internationally. Rose is the 2014 recipient of the NYC Conflict of Interest Board’s Ethics in Government Award, in honor of her record accomplishments as DOI Commissioner, and the 2015 recipient of the Lumbard Bowl, awarded by the U.S. Attorney for the Southern District of New York to an outstanding alumnus or alumna from among all former Assistant U.S. Attorneys from that office. In 2015, Rose joined the Board of Directors of Transparency International USA, the national chapter of Transparency International, the leading global civil society organization in the fight against corruption.