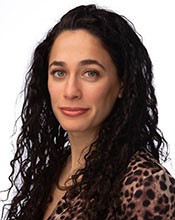 Lauren Racusin, AICP has built her career on strategically investing in cities to improve urban life. She has worked on strategic planning and policy initiatives across Latin America, Asia, as well as North America.

Before joining the Urban Planning Practice at Bloomberg Associates, Lauren was the Deputy Director for Empire State Development in New York City where she advanced economic development initiatives across New York State. She structured and negotiated the State’s discretionary incentives to induce business expansion, retention, and attraction projects in New York City that were in concert with the State’s long-term strategic goals. Lauren previously worked at the Hudson Square Business Improvement District on urban planning and capital projects. She was responsible for the creation and execution of HSC’s $27 million streetscape improvement plan via an innovative public-private partnership. She also oversaw the organization’s $3 million Green Infrastructure Program and managed the $7 million redevelopment of Soho Square. Additionally, Lauren has consulted on planning and architecture projects in Rio de Janeiro, Brazil and Dubrovnik, Croatia, as well as Lima, Peru with the U.S. Embassy in Peru.

Lauren has Masters in Urban Planning and Historic Preservation from Columbia University’s Graduate School of Architecture, Planning, and Preservation (GSAPP). She was awarded the Percival and Naomi Goodman Fellowship through which she developed an architecture and planning project in Yangon, Myanmar. Lauren received her B.A. from Princeton University where her thesis exploring Holocaust memorials in Berlin and the geographies of urban memory earned the highest thesis prize in her department. Lauren served as a Princeton in Asia Fellow in Chiang Rai, Thailand and later worked in Shanghai, China.

Lauren currently serves on the Board of Managers for the Chinatown YMCA and on the Steering Committee for the Women’s Leadership Initiative of the Urban Land Institute New York.